The Cities of West St. Paul

Across the Mississippi River from St. Paul in the Minnesota Territory Charles A. F. Morris surveyed and platted the "Town of West St. Paul" for its “Proprietors;”  James M. Winslow, I. Travis Rosser, Amos W. Hall, Thomas Odell, Artemus Gate, Daniel A. Robertson, and William T. Marsh. The town at this time (June 1855) was wholly within sections seven and eight of Town 28N Range 22W, but by statehood in 1858 nearly all of the land north of present Annapolis Street was surveyed and platted as additions to West St. Paul. Among the first were Banning and Olivier's (Oct. 1855), Jackson and Bidwell's (Aug. 1856), and along the river Bazil and Robert's (Sept. 1856), Marshall's (May 1857) and Robertson's (May 1857).

The population in 1858 was only 400, but the first State Legislature saw fit to pass on March 22 "An Act to Incorporate the City of West St. Paul" in Dakota County. The limits of the city were "all that district of country on the west side of the Mississippi River, commencing at a point where the section line between section 16 and section 9, Town 28N Range 22W, intersect the Mississippi River on the west side, thence running due West along said line, until said line intersects the Mississippi River, thence along down the channel of said river to point of beginning." This Act  provided for most of the powers necessary for efficient local government plus the power "to require every male inhabitant in said city over 21 years of age to labor on streets, lands, avenues, or alleys not exceeding three days in each year," or forfeit one dollar per day for neglect of duty.

Meeting just over two weeks later for the first time was another local government of the same name. The first officials of the Township of West St. Paul (Town 28N Range 22W) were John W. McGrath, Chairman of the Board of Supervisors, George C. Denwell and John Moffett, Supervisors, and John Vanderhorck, Justice of the Peace. These two distinct governments were to coexist for four years, after which time one expired, while the other carried on the name of West St. Paul.

That summer of 1858 the charter of the city was amended to allow the City Council to "borrow money to an amount not exceeding $15,000 in any one year." Wasting no time in spending their newly acquired wealth, the City Council in September called for bids on construction of a bridge (at least 24 feet wide, abutment of rough stone or timber) over the creek on "A" Street. This creek once flowed from near the High Bridge along the base of the bluff to the Kaposia vicinity, while "A" Street became State Street. The $2,300 bridge was completed and immediately endangered in May or June 1859 as a bridge upstream near Fischer's was swept away by the swollen creek. With additional improvements, including the grading of "A" Street at a cost of $1,900, the city's debt grew rapidly. Payments to contractors and city officials took the form of bonds and scrip (certificates of indebtedness), often bearing interest of 12% and payable in up to three years. A high rate of tax delinquency and depreciation of its warrants spelled financial trouble for the small city of 622 citizens in 1860.

A remedy to cure West St. Paul of its fiscal illness was prescribed by the State Legislature of March 8, 1860. The city was prohibited from "incurring liabilities and expenses in any one year to exceed $1,500 for improvements of any and all kinds." Also banned were salaries or fees paid to the mayor and aldermen, which totaled $450 in 1859.

The City of West St. Paul labored under these hardships until March 1861, when further restraints were imposed by another charter amendment. Total disbursements were now limited to $500 per year, only $200 of which could be spent on improvements. Sinking quickly, the ship was abandoned by captain and crew on July 15, 1861, when the last minutes of the City Council proceedings were recorded. With neither complaints nor mention of their intentions the mayor and aldermen simply stopped recording city business, as it became clear that their government could no longer function. The Minnesota Legislature repealed the charter on March 8, 1862 and the City of West St. Paul was no more.

Jurisdiction over the territory of the late city passed to the Township of West St. Paul, although its debts did not. The former city's liabilities were to be discharged by an annual ten mill levy on all real and personal property north of present Annapolis Street, its southern boundary. Content with Township status and administration for twelve years, the 907 citizens (1870) of West St. Paul, in 1874, caused to be introduced and approved by the Legislature on February 24 an Act of Incorporation.

Chapter 111 of the 1874 Special Laws created the City of West St. Paul having the same boundaries as the original all territory from Annapolis Street north to the Mississippi River. But instead of submitting the proposed law within two weeks to the voters of northern West St. Paul Township, as section four required, the Legislature repealed the Act and wrote two others.

Approved March 9, 1874, one Act detached the area in question from Dakota County and annexed it to Ramsey County and the City of St. Paul. The "Forty Acres" of section seven was to remain part of Dakota County. If approved by the voters of both counties, the Act would also provide free passage across the Wabasha Bridge. The second Act approved the same day created a commission to issue new bonds in exchange for those of the former City of West St. Paul and finally dispose of its debts. At the November 3, 1874 general election both

Ramsey and Dakota Counties assented to the Act. In Ramsey County the majority was overwhelming, while Dakota County approved by 1722 to 1187. West St. Paul Township lined up 374 for and 6 against. Although the vote was not binding, the governor concurred and Dakota County was accordingly reduced.

On March 2, 1887 the City of South St. Paul was incorporated to include all of sections 16, 17, 18, 19, 20, 21, all of sections 22 and 26 lying west of the Mississippi River, all of sections 27,  28, 29, 30, 31, 32, 33, 34, and that part of section 35 lying west of the Mississippi, and the "Forty Acres" of T28N R22W. Three days after passage the City Council met and qualified the following officers: Mayor; Joseph H. Lawrence, Aldermen; George W. Wentworth, Philip Crowley, James W. McGrath, Irwin Marshall, City Clerk; Noah S. Groff. Their first action was to inform the Board of Supervisors of the late Town of West St. Paul that their elections have no legal force. Thus, there no longer existed a Town or City of West St. Paul.

It is not surprising that, after a twenty-nine year history of there being at least one West St. Paul and sometimes two, there should be another created. This happened not long after on February 20, 1889, when "An Act to Incorporate the City of West St. Paul" was approved by the State Legislature. The first officers of the present City of West St. Paul were; Mayor Philip Crowley, Aldermen George W. Wentworth, Gustave Otto, Morris L. Locke, John Fitzgerald Jr., James W. McGrath and John Ickler, City Clerk Noah S. Groff and City Treasurer Jacob H. Marthaler. With long experience in local and state government, this group of men was well qualified to establish a stable government of a more permanent nature than that of any previous West St. Paul. Today the City of West St. Paul is comprised of sections 17, 18, 19, and 20, the north half of sections 29 and 30, and "Forty Acres" in section 7 of T28N R22W. Today a City of West St. Paul still exists across the Mississippi River from St. Paul, Minnesota. 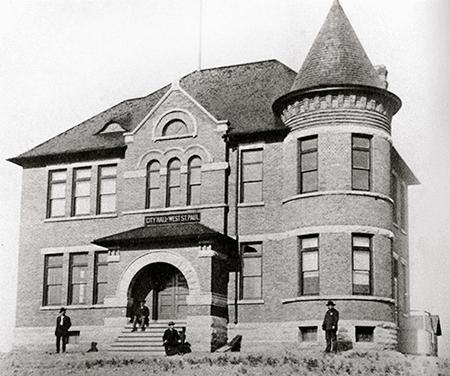